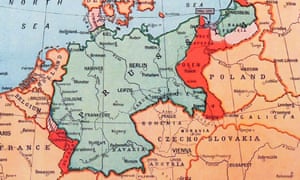 In AD843, Charlemagne’s grandsons divided his empire like mafia bosses parcelling out territory. Louis received the land we were to later call Germany. A large part of it had been in the Roman empire, lying behind the Limes Germanicus, the great wall the Romans built to keep out the barbarians to the east. Cologne, Stuttgart, Vienna, Bonn, Mainz and Frankfurt, all the greatest cities of the future West Germany and Austria, with the exception of Hamburg, grew up within or in the immediate shadow of Rome’s western empire.

Louis knew where his kingdom began – Germany began at the Rhine, of course. He knew, too, that at its heart were territories that were now Catholic lands and had once been part of the Roman empire. But where did Germany end? He wasn’t sure, nor was anyone else. The Treaty of Verdun, which managed the partition, simply assigned Louis “everything beyond the Rhine”. It left open the question of where “everything” stopped. Did Germany end at the Elbe, where Charlemagne’s rule had stopped, or could it go on into the Slav lands to the east, whose rulers had paid tribute to Charlemagne?

James Hawes’s sweeping and confident history shows how deep the division of Germany between west and east became as Teutonic knights, Junkers, Prussian militarists and Nazi imperialists all determined to establish an empire over the Slavs in the lands beyond the Elbe.

The Limes Germanicus never faded away. In the Reformation, all of the Germany that remained Catholic lay within Charlemagne’s Frankish kingdom. The revolt against Rome came from the north and east. The tragedy of German unification is that it did not produce a united Germany but a Prussian empire, which extended the rule of the Hohenzollern court. The industrious provinces of western and southern Germany provided the funds for the Prussian state and military and tax breaks for Junker aristocrats.

The first recognisable forerunners of the Nazis stood as explicitly antisemitic candidates in 1893 elections and won 16 Reichstag seats. Every last one of their victories was in Lutheran Prussia, Saxony and Hesse. Germany might have won the first world war, but it was not enough for Ludendorff and the Prussian generals to beat Russia and see the Bolsheviks installed. They pursued a millennial fantasy of an empire over the Slavs and remained determined to waste troops in the east, who might have resisted the victorious allied advance from the west in 1918.

The Nazis’ strongholds were, once again, in the Lutheran east rather than the Roman west. In July 1932 only 17% of Nazi votes came from Charlemagne’s old kingdom in the Catholic south and west. If you were trying to determine whether a random German voter from 1928 would back Hitler by 1933, asking whether they were rich or poor, proletarian or bourgeois, urban or rural, man or woman would scarcely help you. The only question with any predictive value worth asking would have been whether they were Catholic or Lutheran.

No one can deny that Germany is a part of the west today. The trouble is that no one today can say what ‘the west’ is

Now Germany is reunited and its new capital is the old Prussian capital of Berlin, far beyond the Elbe, rather than Bonn in the west. Once again, west Germans are pumping colossal sums of money to the east, not to fund Prussian militarism and agricultural subsidies for Junkers this time, but to pay for remarkably ineffective welfare programmes. Once again, the east is where extremism flourishes, whether in the shape of the far right Allianz für Deutschland or the heirs of the communists in Die Linke.

I admire Hawes immensely, not least because he is such a versatile writer. He has produced a string of satires of modern Britain. The best, Speak for England, foreshadowed Farage, May and Brexit with such unnerving accuracy it deserves some kind of prescience prize. Yet at the same time as writing comic novels, he has produced a learned study of Kafka and now this bracingly provocative history of Germany.

Even in normal times, he would have given us much to talk about. As Hawes says, history gives us no right to throw the Prussian/Nazi past at all Germans. We should worry that reunification has re-established a truncated version of the Prussian empire and that Christian Democrats will one day ally with the eastern far right or social democrats with the eastern far left.

But these are not normal times. With Brexit and the Trump victory, Germany is now the world’s pre-eminent liberal democracy, a role it never sought and appears ill-equipped to manage. No one can deny that it is a part of the west today. The trouble is that no one today can say what “the west” is.

Joschka Fischer, Germany’s first Green party foreign minister, reacted to Trump’s election by wondering if there was a west left. “Europe is far too weak and divided to stand in for the US strategically,” he said. “Without US leadership the west cannot survive. The western world as virtually everyone alive has known it will certainly perish before our eyes.”

As America and Britain chase impossible dreams, as populists across Europe exhume chauvinist nationalism from its shallow grave, as Vladimir Putin licks his lips and pats the heads of allies on the far right and left queuing up to offer him their allegiance, Hawes’s question – what is Germany and what does it want to become? – has a frightening urgency.

… we’re asking readers to make a new year contribution in support of The Guardian’s independent journalism. More people are reading and supporting our independent, investigative reporting than ever before. And unlike many news organisations, we have chosen an approach that allows us to keep our journalism accessible to all, regardless of where they live or what they can afford. But this is only possible thanks to voluntary support from our readers – something we have to maintain and build on for every year to come.

At the Guardian, we believe that access to trusted information is a right that should be available to all, without restriction – independent reporting, distributed fairly, accessible to everyone. Readers’ support powers our work, giving our reporting impact and safeguarding our essential editorial independence. This means the responsibility of protecting independent journalism is shared, enabling us all to feel empowered to bring about real change in the world. Your support gives Guardian journalists the time, space and freedom to report with tenacity and rigor, to shed light where others won’t. It emboldens us to challenge authority and question the status quo. And by keeping all of our journalism free and open to all, we can foster inclusivity, diversity, make space for debate, inspire conversation – so more people, across the world, have access to accurate information with integrity at its heart. Every contribution we receive from readers like you, big or small, enables us to keep working as we do.

The Guardian is editorially independent, meaning we set our own agenda. Our journalism is free from commercial bias and not influenced by billionaire owners, politicians or shareholders. No one edits our editor. No one steers our opinion. This is important as it enables us to give a voice to those less heard, challenge the powerful and hold them to account. It’s what makes us different to so many others in the media, at a time when factual, honest reporting is critical.

Please make a new year contribution today to help us deliver the independent journalism the world needs for 2019 and beyond. Support The Guardian from as little as £1 – and it only takes a minute. Thank you.