The few people not caught up in leader worship in Brighton asked how the cult of Jeremy Corbyn’s personality would die. Would his support for Brexit drive his young admirers away? Have we reached peak Corbyn? They forgot the lesson of history that you don’t worry about personality cults that fail. You worry when they succeed.

Cultism was everywhere at the Labour conference. It was in the Corbyn memorabilia on sale at conference stalls. It was in the chants of “Oh, Jeremy Corbyn” that greeted his every appearance. It was in the delegates’ desire to extend the sycophancy to Corbyn’s lieutenants, which died when the crowd realised “Oh, Rebecca Long-Bailey” didn’t quite work. Most, and most ignobly, it was in the demeaning attempts by leftwing politicians and journalists to atone for the heresy of doubting Corbyn’s ability to increase Labour’s vote share and worm their way back into his affections. 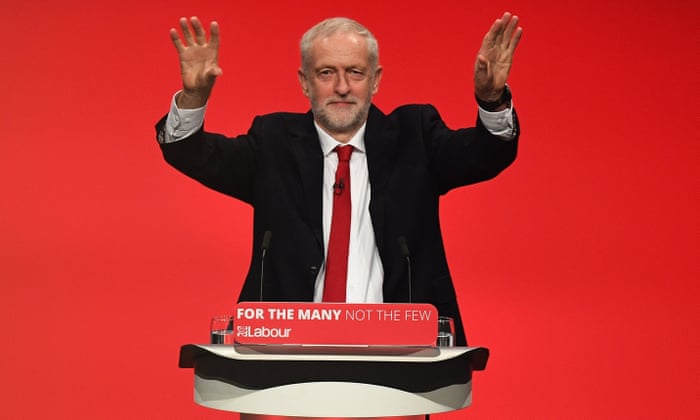 Tom Watson, Labour’s anti-Coriolanus, tried to save his position by telling the twee story of how he was standing in a field at Glastonbury, when the festival-goers, with that striking originality that so marks the Labour left, began the Corbyn chant. “And as they sang,” he simpered to the applauding crowd, “I realised it’s actually better to be loved than to be feared. And Jeremy has shown us that it’s possible. Thank you, Jeremy.”

Everyone who knows Watson knows he believes Corbyn’s programme presents a direct threat to Britain’s economic prosperity and national security. But a politician who once found the courage to fight Rupert Murdoch is now so frightened of speaking his mind he fills his mouth with flattery.

The scale of the idolatry is its most significant feature. Even the most unpopular leaders have followers who will back them unconditionally. True cults of personality are mass movements. Without the warm feeling of being part of a collective that boos and hisses together, they would fall apart.

“Men, it has been well said, think in herds,” said Charles Mackay, the Victorian author of the seminal Extraordinary Popular Delusions and the Madness of Crowds. “It will be seen that they go mad in herds, while they only recover their senses slowly, one by one.”

As revealing and as historically commonplace is the infantilism cults impose. The far left has succeeded by creating an overwhelming feeling that “Jeremy” – and it is always “Jeremy”, not “Corbyn” or “Mr Corbyn” – must be protected from the media and his fellow politicians. So deep does it run, Corbyn’s sidekicks banned Labour MPs from the conference floor, as if they were Glastonbury plebs without a VIP pass.

Labour members treat the leader of the opposition as a child who needs a safe space to hide him from the backstabbing and barracking all other politicians must endure. In doing so, they have turned themselves into children who cannot handle the robust debates of a free society.

As always, the insistence that hope resides in one hero brings with it the whiff of messianic religion. I winced in Brighton as the mere mention of Corbyn’s name on stage drew applause. Like worshippers punctuating a church service with “amens”, Labour members felt a religious duty to acknowledge the presence of goodness.

Corbyn gives every appearance of wallowing in the attention. But, wisely, he adopts a saintly air of modesty. After a portrait of his head crowned by a halo was paraded in the conference centre, he told Sky News he had worked hard in the election campaign but, mighty though his labours were, he did not deserve to be sanctified. “I often feel deeply embarrassed by it. It’s not my wish and it’s not my doing.” If he meant a word of this, Corbyn would ask his aides why they appeared to take the Lord’s name in vain by addressing him as “JC” in public.

The consequences of Labour’s failure to break away from a messianic leader were painfully evident in Brighton. If the conference itself might as well never have happened for all the good it did, the streets outside were filled with life. Everyone could sense that a decrepit Tory government could be forced to concede acres of ground. Unfortunately, everyone also sensed that Corbyn had no intention of applying pressure. Let us pause for a moment to consider the historical irony here. The far left says its despises “Blairite” compromise. Yet on the great issue of the day, it has so triangulated with the Tories even Tony Blair is now outflanking “Jeremy” on the left.

Before the conference began, there was a demonstration by supporters of free movement. They were not just protesting to uphold the rights of EU citizens in Britain and British citizens in Europe. They understood that by stopping today’s young from becoming Europeans, the government was stopping them working where they wanted, living where they wanted and loving and marrying who they wanted. By Brighton beach, they could sense a dense fog was about to fall on the Channel that would cut them off from the wider world.

On the fringe, I heard the Irish Labour leader, Brendan Howlin, talk with urgency and seriousness about the “high price in blood” Ireland and Britain had paid to remove the last hard border on the island of Ireland. The risk that Brexit would reimpose it was too great to run. In a tone that was close to an instruction, he said the British Labour party had to commit to protecting the peace by staying in the EU customs union. Labour claims to be a party of internationalists. It gratefully took the votes of Irish immigrants and their children. Under Corbyn, it says it is all for peace. But when asked to maintain the hard-won peace in Ireland, it could only waffle and censor.

Corbyn does not want to reopen the EU debate because he believes Brexit frees him to push through a programme of socialism in one country. (There won’t be restrictions of “state spending”, he said last week, as if the loss of single market membership and capital flight won’t impose restrictions aplenty.) To avoid embarrassing him, Momentum blocked a full debate on the EU. As one dismissive delegate explained, arguments about the most important challenge we face were merely a “disgraceful” attempt to undermine Jeremy.

It was all about Corbyn. It always is.

I cannot predict if he will become prime minister. But we don’t need to wait for him to come to power to understand why we must always resist personality cults. Even while it is in opposition, cultism has turned Labour into a childish, sycophantic, thuggish and unthinking party. That, surely, is bad enough.