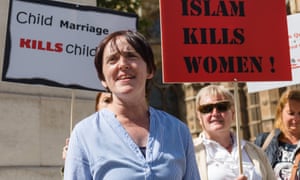 It sounds like the start of a bad stand-up routine. An Irish lesbian feminist walks into Ukip’s HQ and… And the Kippers walk out. Or at least three-quarters of Ukip’s members of the European parliament say they will walk out if Anne Marie Waters becomes their new leader.

Ukip’s politicians are not threatening to resign because Waters is Irish or a lesbian or even a feminist. Despite Nigel Farage’s cloying friendship with Trump and admiration for Putin, despite Ukip’s naked use of racist scaremongering in the Brexit campaign, Ukip politicians are not objecting to Waters because she is left wing, but because she is not nearly left wing enough.

Waters has managed a feat many thought impossible – she is too reactionary for Ukip’s leaders to stomach. Like anyone who has been involved in the fights for freedom of speech and human rights, I am suspicious of the “Islamophobe” label Waters attracts. From Salman Rushdie onwards, the religious right has used it to enforce blasphemy taboos. Like others, I prefer “anti-Muslim bigot” because it describes a real phenomenon: people who hate Muslims because they are Muslim, rather than freethinkers who criticise the manmade prejudices of “sacred” texts.

Trump is an anti-Muslim bigot, as is Geert Wilders; so, in my view, is Anne Marie Waters. The 3 million or so Muslims in Britain cannot be a part of British society, she says. “There is one issue on which Ukip really should now step up to the plate – Islam and Muslim immigration,” her manifesto explains. “The party must publicly acknowledge that Islamic culture is simply not compatible with our own.”

Ukip politicians say in public that they must stop her because they do not want their party to become a sectarian gang that offers British Muslims no hope. In private, they timorously echo many of today’s artists and satirists. They tell journalists they do not want to make themselves a Charlie Hebdo-style target by taking on Islam too vocally.

Ukip’s vetting procedures may stop Waters running. The party banned her from fighting an election in London in 2015 because she had described Islam as “evil”. But if they don’t, many of the party’s old guard think that Waters and the activists she has brought in with her will take control. Ukip could soon become a “party of the street”, one told me. More suited to fistfights than electoral fights.

Too right wing for Ukip. Too extreme for the extremists. What a fanatical figure Anne Marie Waters cuts today. To my eyes in particular. I once knew and admired her as a principled Labour activist. She worked with Asian feminists in their hard and essential struggle against theocratic constraints, most notably on British Muslim women.

The pressure group I knew her from was called One Law for All. It opposed the willingness of “liberal” society to allow the spread of sharia courts that more often than not treated women as second-class citizens. As its founder and Waters’s then boss, Maryam Namazie, explained, secular campaigns against intolerance from ethnic minority religious leaders must walk a tightrope. On the one hand, they must cope with attacks from the relativist left, which thinks it wrong to stand up for women’s rights and gay rights if the women and gays in question are not being oppressed by western or capitalist forces. On the other, secularists and feminists had to take great care to stop their campaigns being exploited by racists and xenophobes.

I know from experience that all who have offered what help they can to the secular cause can become infuriated by the self-negating vacuities of the modern liberal left. It is my firm view that historians will look back on our willingness to bend the knee before self-appointed clerical leaders with amazement and more than a little contempt. But Waters was not content with fighting liberal hypocrisy. She flipped. She cut all links with her sisters and comrades and chose the worst possible course. Henceforth, she determined to fight the Islamist religious right by joining the white racist right.

The tale of the former leftist turned Ukip contender is emblematic of our times. Everywhere you see the upholders of ideas that were once ignored or dismissed extracting their vengeance on a Britain that spurned them.

It is easy to forget it, as we live through the unnecessary crisis they have brought on the country they profess to love, but Britain’s Eurosceptics once had a point. In areas of public policy as varied as agriculture and health and safety, EU directives lacked democratic legitimacy. Official Britain, by which I mean the leaders of the main parties, the civil service and the BBC, took little notice. Just as our supposedly “liberal” society ignored complaints about illiberal religious practices, so our supposedly “democratic” country ignored complaints about the undemocratic EU. Or, rather, its leaders did on the grounds that the price of regaining sovereignty was too high to pay. As we are now finding out. The Corbyn movement is starting to resemble a red version of Ukip in its indulgence of conspiracy theory and support for a hard Brexit. Farage praised Corbyn as “almost a proper chap” and Katie Hopkins has hailed him as a “good man”. If you are repelled by the spectacle of the far left and far right uniting in their opposition to the EU, do not forget that Corbyn and his supporters once had a justified grievance as well.

They had every reason to believe that official society had failed to live up to basic standards when it bailed out the bankers and made the poor and working classes pick up the bill. The left’s campaign against the hypocrisies of austerity, like the dissident feminist campaign against the hypocrisies of liberal multiculturalism and the Eurosceptic campaign against EU authoritarianism, was justified. The fringe movements had every right to be self-righteous and, as you cannot help but have noticed, they have exercised that right to the full.

But they cannot keep on claiming victim status now that they control the White House, Britain’s Brexit administration and the Labour party.

“Tout comprendre c’est tout pardonner,” goes the French proverb. To understand all is to forgive all. But that cannot be true in politics. I understand how anger at liberal hypocrisy drove Anne Marie Waters to the far right. Just as I understand why Britain voted to leave and why the far left controls the Labour party. But I don’t forgive a single thing about it.